08 Mar THE PIETA OF BARED WIRES

Posted at 09:26h in Uncategorized by traver_admin 0 Comments
0 Likes
Share 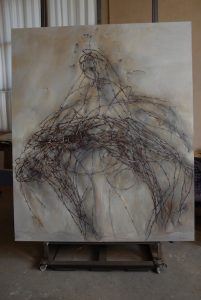 I have read the critic of the philosopher Julio García Caparrós about my painting The Pieta of barbed wires with the greatest interest. The full text can be found on his Facebook (commentary of the 8th august 2016).

I cite some extracts:

“In fact, my Pieta” says the philosopher, “I have recently met it, it is the one of the painter of Burriana Vicente Traver Calzada, a painting about a sculpture made of barbed wire”.

“…the laying body of Jesus in his mother’s lap is a figure of universal scope. Somewhat as the essence o the maternity of the maternal. Because the mother is the one that survives, the one that persists to the extinction of his son”

“…we can imagine this new Pieta in Auschwitz-Birkenau, in Siria, or in the strip of Gaza”. 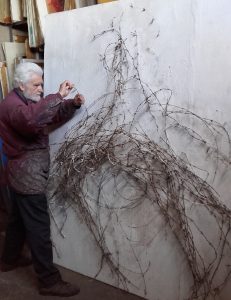 I identify with the words of M. Julio García Caparrós, to which, as an enthusiast of the “making off”, I only will add some technical details of the table, some anecdote of the process of realization, data of the materials used, photographs, etc. 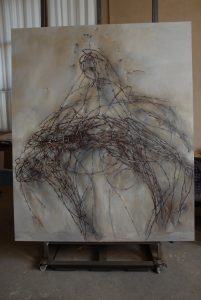 It is an oil painting of 2008 painted over table of 180 cm x 220 cm. The colours employed were: Titanium white, black, yellow and red paintings, overseas blue, limited veils of Siena and carmine. The diluent or medium was composed by polymerized linseed oil and copal varnish.

During two months my task in the building of the sculpture-model for the table was to cut, twist, set meters and meters of bared wire (with the bottle of hydrogen peroxide handy because the wires surged dangerously) to make the entanglement acquire the classical form of the Pieta, I mean, the Mother with the Dead Son in her arms. 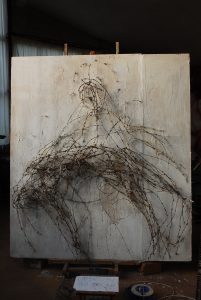 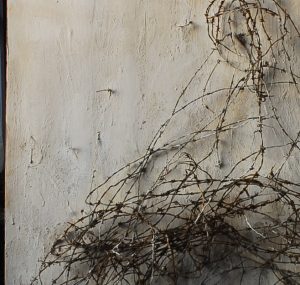 From the beginning it was a creative work both in its plastic aspect and in the idea of the suffering and hurt that it enclosed; I ever kept in mind the scary consequences of the wars, the killer instinct of men, our stupidity to repeat the same mistakes, the incomprehensible silence of God…

Once I finished the sculpture-model, I tried different forms of lighting. With artificial, 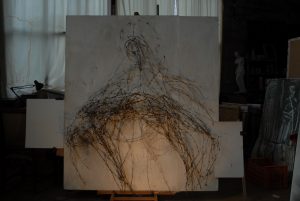 front-fush light the relief of the wires produced a very suggestive shading, but I turned off from the austerity that I had therefore decided, so I put the model under the large west window of the atelier and I decided to paint it from nature, without concessions to any dramatic effect.

When one paints from nature a table does never finish. The photography to every realist painter resort embarrassingly doesn’t provide the truth of having the model in front of you. You give up when seeing that you are repeating or that you employ known predefined resources.

The table, as I raise (and I raise in general my work of painter) is a fight with that you have in front of you and with yourself. They never said me that this table was “nice”. To the capricious sensibility of some art collectors and museum curators, it can be ever excessively serious. A replica of the same model I included in the tables of the Hall of the Diputación of Castellón, in memory of the massacre of civilians perpetrated in the province by the Napoleonic troops during the Independence War. Sometimes, with the table I have exhibited the sculpture-model. In front of the real and painted hank of wires, spectators wonder and smile…when step by step their discover what is represented there, the expression of their faces change.

I always knew that a painting doesn’t escape by the history that tells us. The thing that the painter tries to communicate is included in every brushstroke, the colour and the texture, it is a whole that is captured once and for all.

As well as the abstract painting often typically degenerates in the pure decorative style, the danger of the figurative painting is the infection of the literary, or the commitment somewhat infantile of the photographic imitation. Painting from nature protects from both vices because both the model and the look of the painter change constantly. Over the model, light acts and a fruitful dialogue are established, and the atmospheric density, over the eye and the hand of the painter, weighs with emotions: the humour of the moment or the cultural background that one possesses.

Still, if all that isn’t conjugated with a sort of state of grace where the intuition guides us about that must be highlighted or removed in our work, the work of art fails. The pure impulse creative without the order that provides the reflection and the election of the right technique produces unconscious works, on the contrary, the predominance of the mental in art leads to academicism, to works that born dead.

The artist, generally, focuses his work on Beauty and the veracity of his own language, the look of the sensitive and intelligent spectator contributes new meanings and enriches it opening new possibilities.