Posted at 08:52h in Uncategorized by traver_admin 0 Comments
0 Likes
Share

The celebration of the Last Supper of Jesus with the twelve apostles remains in a very important place in the Christian iconography. The last Supper of Leonardo Da Vinci, finished in 1497 to the church of Saint Mary of Grace of Milan, although the fast deterioration suffered particularly by the bad technique used in its execution, has been the referent to many painters later in a sort of inertia and without worrying too much about verify the fact placing it in its social context, the habits and fashions of the time, repeat the same schema of the great master Leonardo, coming into play similar mistakes of documentation.

All my respect and admiration to the work of art of the genius, that I could see before its last restoration, but I think that it is good to learn both from the foreign and own mistakes, so when I was commanded to paint a Las Supper to the church of Nules, I imposed to myself to inquire as far as possible how the traditional Passover, its ritual, composition of the table and so on, but provided the exceptional nature of the motive to represent, apart from the archeologic realism and the consultation of the art of work of the past, I saw immediately the need of resort to theologians and specialists on this issue.

Of course, first of all, I resorted the Gospels, but also to the study of the Pope Benedict XVI which speaks about the Las Supper, the controversy of the date of its celebration and innovative character, by offering Jesus himself as a victim, making coincide his crucifixion with the sacrifice of the paschal lamb.

I had- as it always happens between the person who commission a work of art to the worship that search a catechist effect and the painter, who inevitably looks for the artistic perfection- the little arguments which finally became in ver interesting contributions of the priest of the church the father Esteban who bravely promoted the project, of the historian and chronicler of the village of Nules and the architect whom we arranged the technical details of the size, the choice of the perspective, the set up of the work and son on.

From this first phase of documentation came out the first sketches which considered the form of inverted U of the table, and the place of the diners according to their category, the Roman fashion of lie in divans resting on the left arm during the four wine libations, the roast lamb, the bitter grasses, the dish reserved to the prophet Elias, etc.

The first character during the celebration of the dinner was placed in the second place of the right arm of the table, I mean, Jesus. On his right was John, his beloved disciple, and on his left another important character of the twelve: Judas… This explains some of the sentences of the Gospels as “ the one who has dipped his hand into the bowl with me will betray me” or during the washing of the feet when he poured water into a basin and began to wash his disciples’ feet until arrive at Peter, who was placed in the last place of the left arm of the table an alluding to serve others. My table pretends to represent the solemn moment when Jesus shares the bread and says: “take and eat: this is my body”.

This unexpected announcement might have produced consternation in the group that surely didn’t understand what was he saying and they turned around him with inquisitorial looks. I had tried to express the curiosity, the surprise, the disbelief or even the omen of the tragedy that this revelation announced. I imagine the disciples as young men, exalted by the possibility of being in front of a leader or Messiah who will free them from the Roman yoke, but at the same time introduced the idea of the universal love, the pacifism and a direct relationship with the Creator that crashes with the interests of the priests.

I know that an excessive scientific-historic-archeological rigour can cool down the impulse of creating a work of art of this characteristics, in which religious significance that is pretended to communicate and the artistic quality of the painting are conjugated, and the painting is a whole thing of an idea, composition, light, colour, expressivity, emotion, etc.

To this composition of my Las Supper, I have joined forces with a dozen of models of appropriate age, dressed in tunics, mantles, sandals and turbans of the cloakroom made for this time. 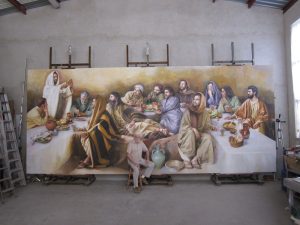 The size of the table is 700 cm of wide par 300 of high. I have painted it over a phenolic table and the chosen technique has been the tempera of egg yolk emulsified with thickened oil and Dammar varnish. The preference for this technique, although its hight difficulty, has been determined by its optical qualities, the tempera produces a matte painting of a beauty and colour

Insurmountable by other techniques, it offers a lightness that we only can achieve with a good preparation “al gesso” and with a longevity guaranteed by the experience of the centuries. The table has been hanged on the wall very high, so I have been forced to paint figures of a bigger size of natural and to reinforce its drawing to more clarity of contemplation from afar. To work with a big format and with the same technique tempera-oil that I used in the table of the high altarpiece of the co-cathedral of Castellón has been a experience that, on the one hand, made me return to the Renaissance tradition in this issue because of the technique, the scaffolds, the relationship with the commissioners… but on the other hand, I have investigated in the wonderful properties of a technique that nowadays has been neglected by the painters that prefer the canvas and oil and the prefabricated paintings to the manipulation of the pure pigments and the contact with the oils and natural resins. I mean, it has given back me to the traditional trade of painter.

One the table come out from my atelier it will acquire a life on its own, being exposed to the critic, the approval, the rejection… but this already is another history.