Posted at 10:19h in Uncategorized by traver_admin 0 Comments
0 Likes
Share 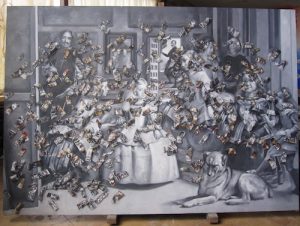 The study of Michel Foucault of the Meninas of Velazquez that analyses the complex game of riddles that it contains, rekindled the interest of artists and philosophers for the great work of art, nowadays considered as one of the top of the European baroque painting.

By the end of the 18th century, Goya reproduces and in some way discovers the table of the Meninas, translating it to the engraving and taking it as inspiration for his own portrait of the Royal Family of Charles IV; Picasso realises a large series about it; Equipo Crónica embeds fragments of the table in its photomontages…Its influence in E. Degas, Renoir, Manet and practically all the impressionists is obvious.

Faithful to this tradition and fascinated by the disturbing space opened from the sight of its self-portrait, including in the table in an amazing way because it is very predominant, even the spectator that can’t lie exactly in it, I join the chorus and present you some of my works of art directly influenced by this extraordinary painter to whom E. Degas absolutely proclaimed as the “painter of the painters”.

My first incursion in the exciting world of the Meninas took place over the year 1974 with the oil of 230 x 290 cm which today is shown in the Museum of Contemporary Art of Villafamés, about which the art critic Raúl Chavarri, in Cuadernos Hispanoamericanos, writes: “Traver Calzada practises a realism of a deep symbolic sense, transgressing sometimes the habitual conditions of the table and suggesting his painting from some postulates with factors of dissolution and confusion. For instance, when the “d’après” of the Meninas takes place, his representation is based on a deep dissolution and fantastic juxtaposition of garbage elements”. 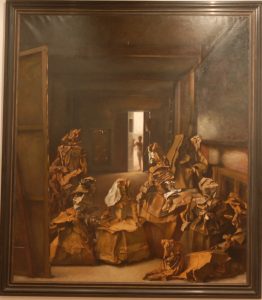 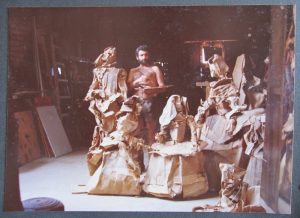 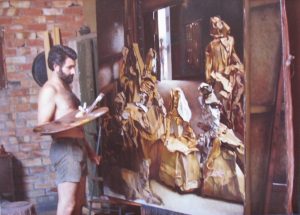 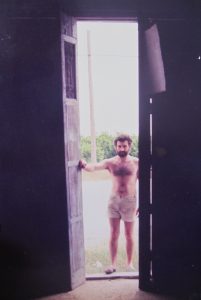 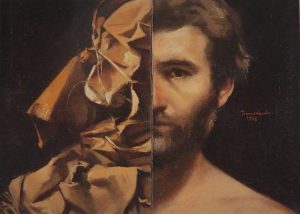 In Homage to Velázquez (oil and drawing of 80 x 93 cm from 1982) Traver Calzada alludes to the magic that detaches from the hands of Velázquez, in Meninas (oil from 1985 Colección Bancaja Castellón) the habitual place of Princess Margarita is occupied by the image of a worker-peasant and the lady-in-waiting (menina in Portuguese) who in the table of Velazquez leans to serve the Princess, has been cut off and straightened. The intention doesn’t need any comment. 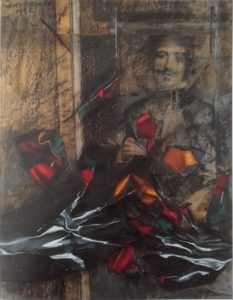 The family (oil from 2015 on canvas of 200 x 170cm), where the characters of the table of Velázquez called as the table of the family, have been replaced by my own family, little dog included. Princess Margarita has been converted in a broken violin and her servants in guitars, trumpets, lutes and trombones… 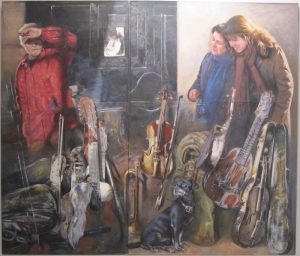 Another work of art is Meninas, where the King Juan Carlos and the Queen Sofía are included (oil on canvas of 230 x 290cm in the Museum of Fine Arts of Castellón). 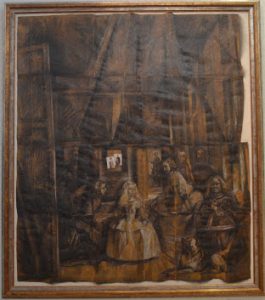 Princess Margarita surrounded by painting tubes (oil from 2015 of 115 x 125 cm) was a pictorial experiment that generated another canvas of 300 x 210cm from the same year, About the Meninas, where, over the grisalla of the Meninas of Velázquez, taking up the famous void that has produced so many interpretations, I suggest my own one: the interpretation of being only a pictorial space reduced to the primary elements of the table, I mean, the composition, the rhythm of the elements represented, the colour, the matter, the optical illusion. 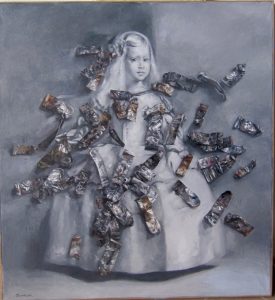 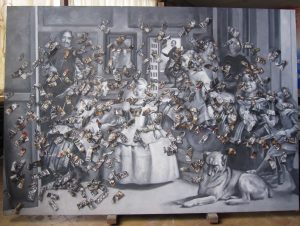 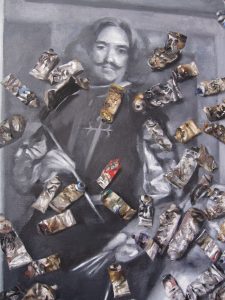 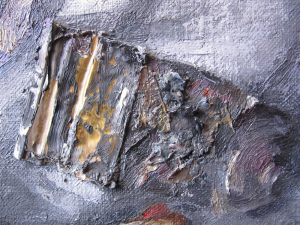 To this table new series of variations in drawing, engraving, collage, etc. followed, that I want to continue. 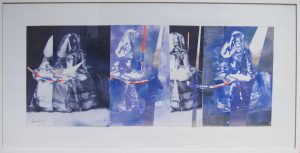 The Meninas os Velázquez is an open table which will continue inspiring to painters of many generations. Its contemplation dignifies the painter like no other known table, stimulating to continue painting. If you want, with the series of self-portraits that I include, you can compose your own interpretation of the Meninas in a kind of puzzle. You can locate me in the place of the painter; as reflects in a manifold mirror, as Princess Margarita pointing himself his heart, as the menina Doña Agustina offering a dead rat instead of the notorious pitcher of water, as the other menina Doña Isabel de Velasco with the vase of flowers. I also appear leaning out in the door, as the lodging master fo the palace Don José Nieto; I am the diffuse couple on the background, the very decent dwarf Mari Bárbola and even the mastiff dog laying in front of the Princess, to whom a deformed little character, Nicolasito Petusano, bothers with the tip of his foot. 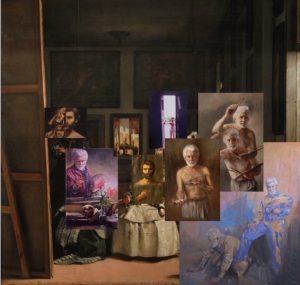 Something shocking in Velaquez life is to verify his complete commitment, apparently servile, to his sole master the King Felipe IV, to whose shadow, in return, counting on the patronage of the Count Duke Olivares, Sevillian as Velázquez and predisposed to favour his civilians, he was climbing from the category of simple painter to the lodging master, getting with many attempts, schemes and we can say having connections, the yearned income to the Order of the Knights of Santiago.Velázquez died rich, with lawsuits surely generated by the palatial envies, raised beyond any other painter of his time could dream. I suspect that the allusion of the king to his phlegmatic character really means that he was a slacker.And it seems to me that I have

Velázquez died rich, with lawsuits surely generated by the palatial envies, raised beyond any other painter of his time could dream. I suspect that the allusion of the king to his phlegmatic character really means that he was a slacker.And it seems to me that I have discovered something about this in his rapid, briefly, diluted way of painting. The Meninas is a sketch solved in a fast-tracked procedure. .. but Velázquez was a genius and he had goog assistants, so he could afford it. I think that this aspect of his life and works of art deserves greater attention and from here I invite to the specialists to deepen in it.